JOIN A CLUB OR CAUCUS

Dates and Times are subject to change without notice.  If you are attending a club or caucus for the first time email or call to make sure you have updated info.

(Some meetings are virtual until COVID health concerns pass). 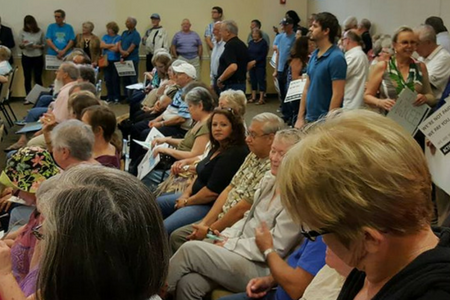 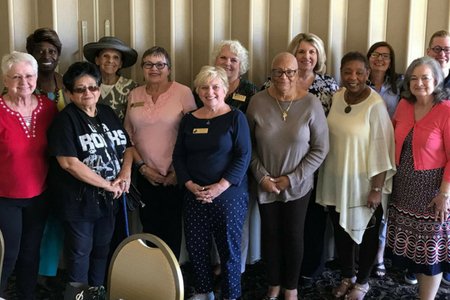 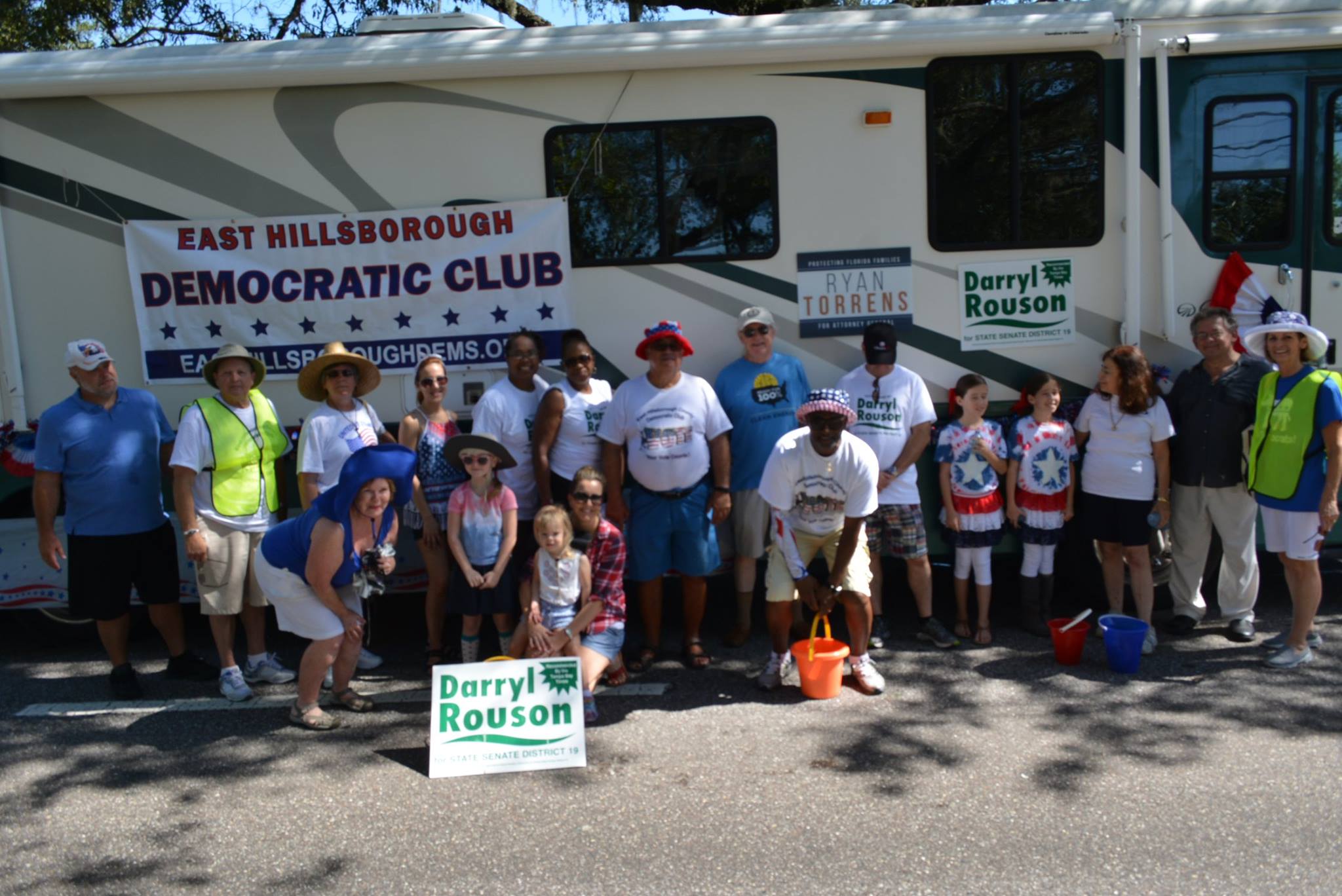 EHCDClub@gmail.com
Second Tuesday of each month No Meeting in July.
6:30 pm 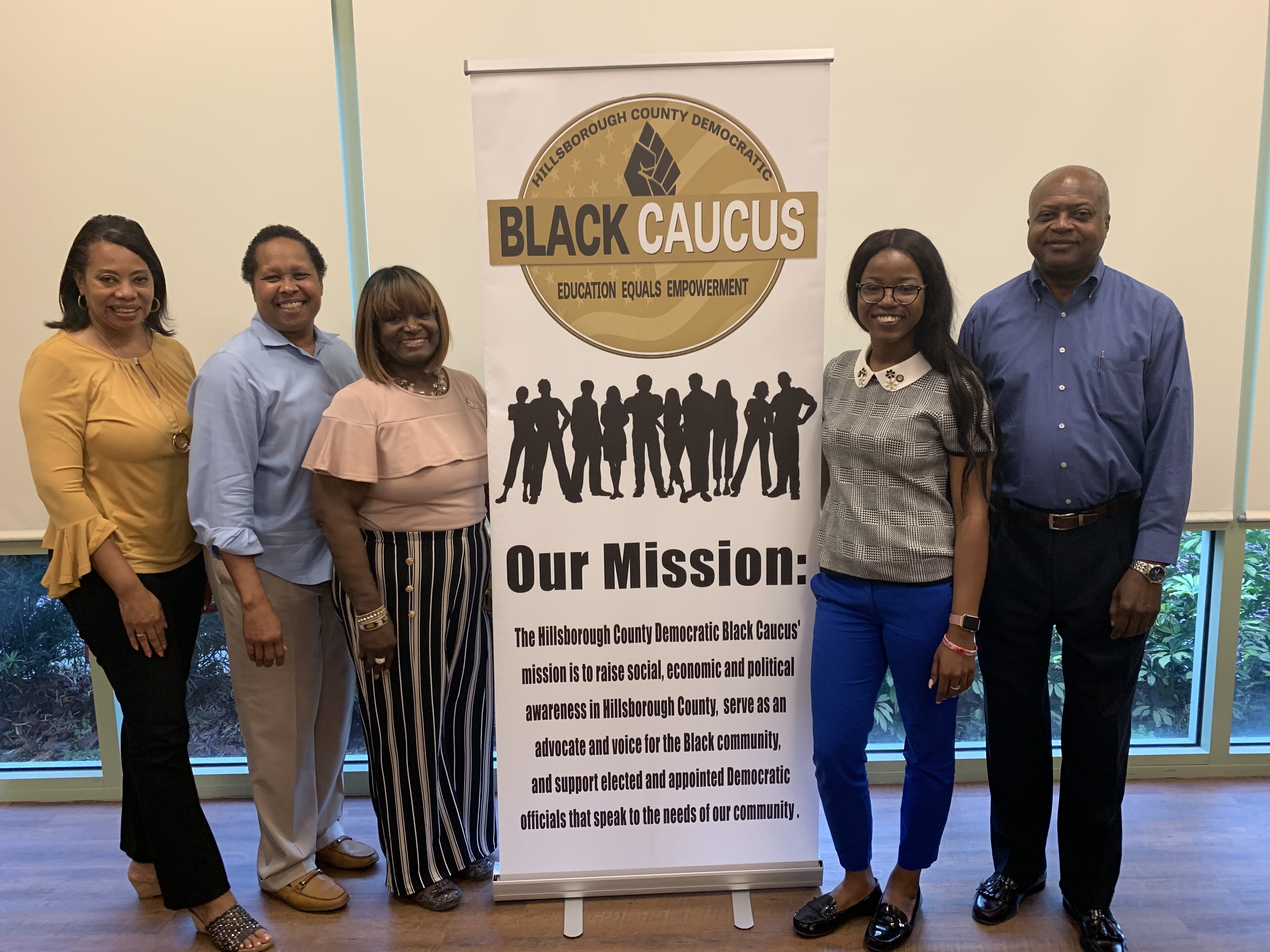 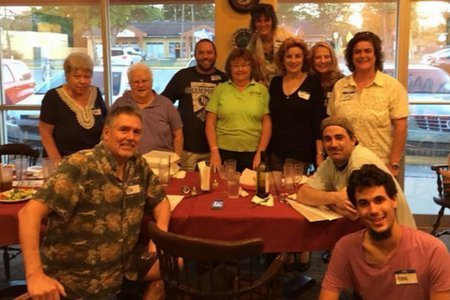 president@hillsboroughlgbtqdems.org
2nd Wednesday of each month No meeting in April
Social hour begins at 6:00 pm, meeting at 6:30 pm to 8:00 pm
Visit Website 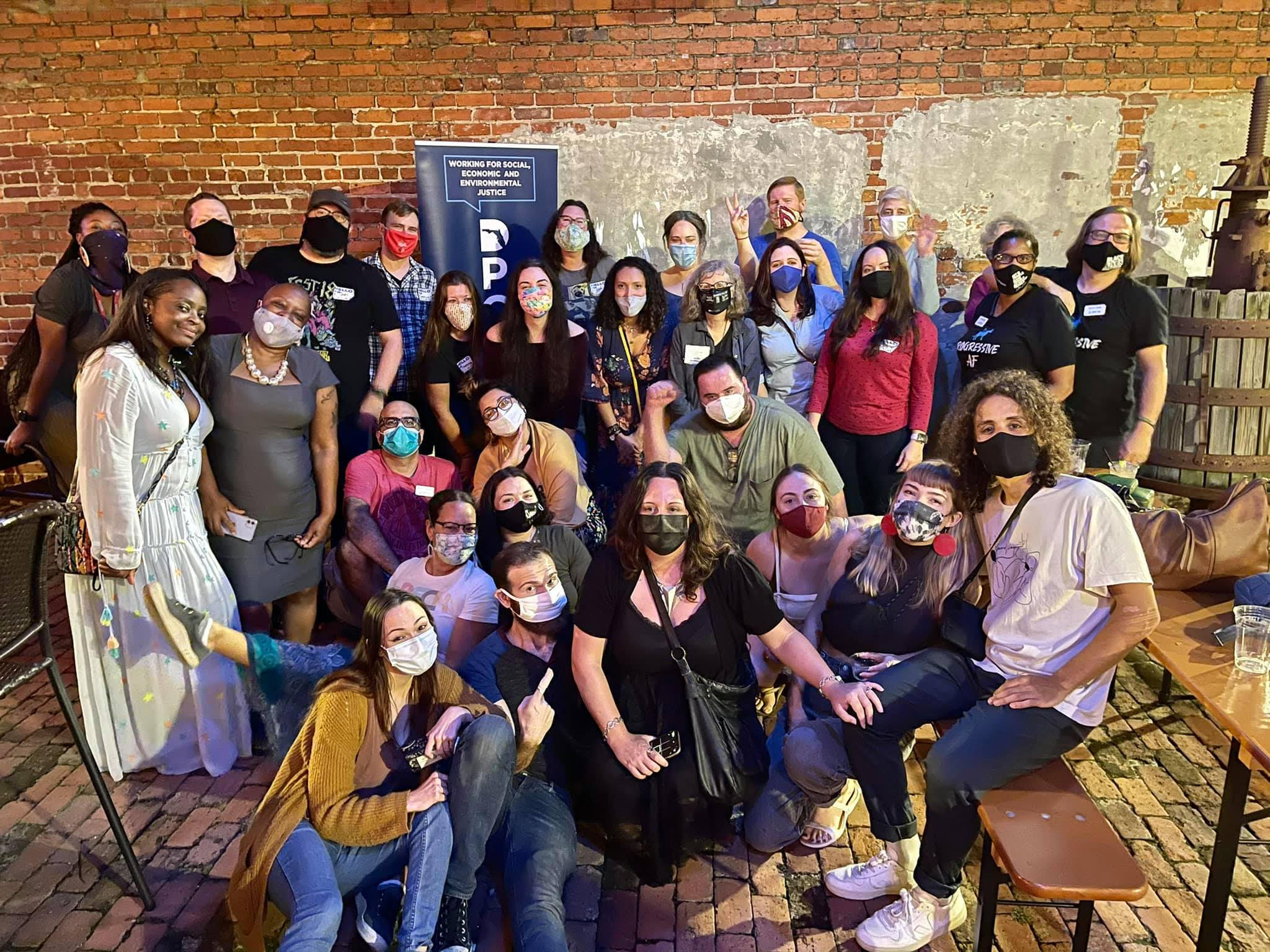 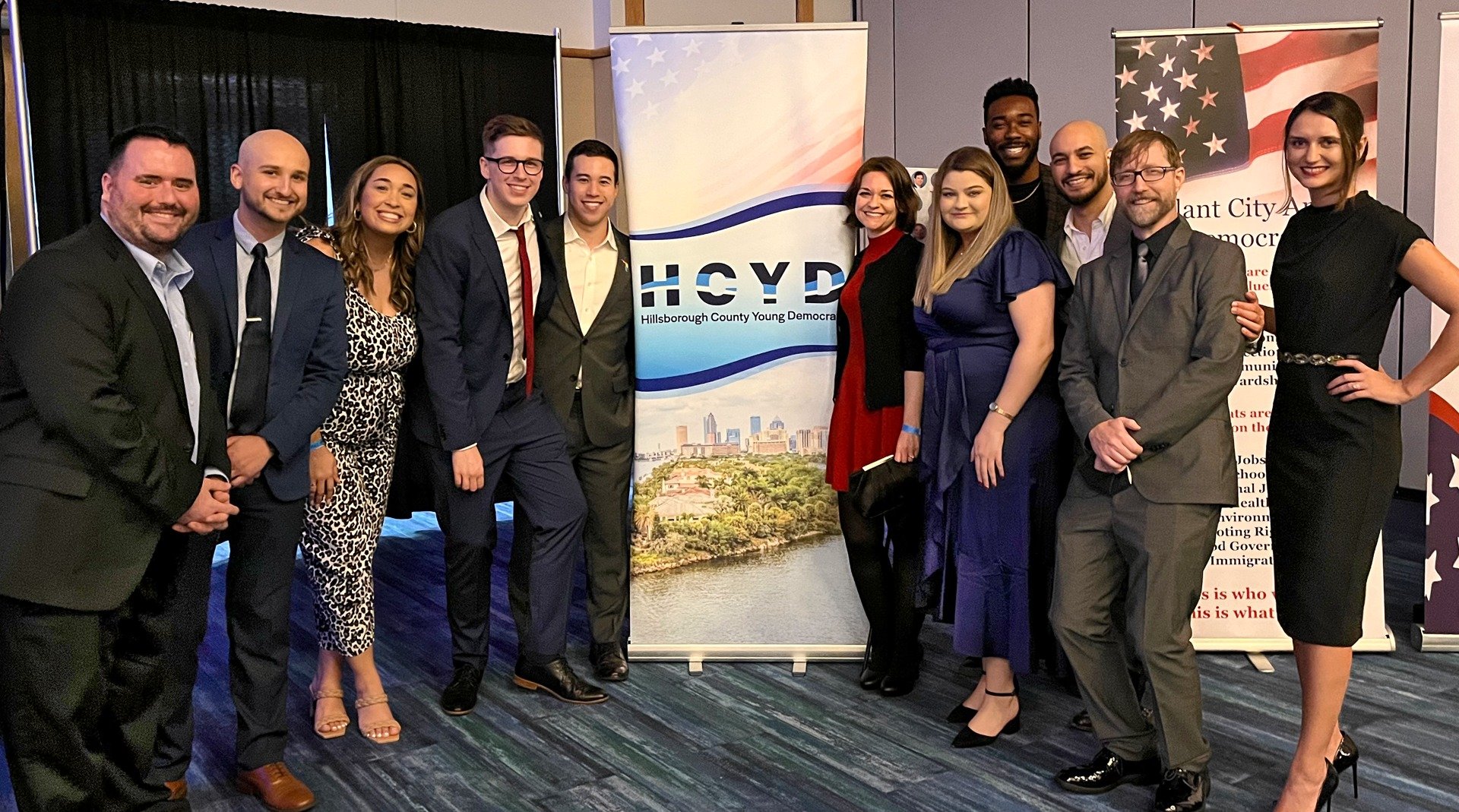 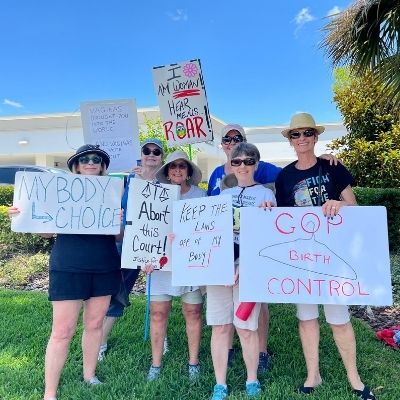 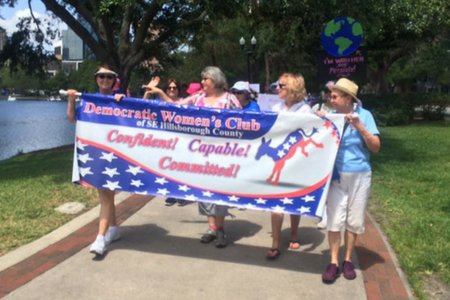 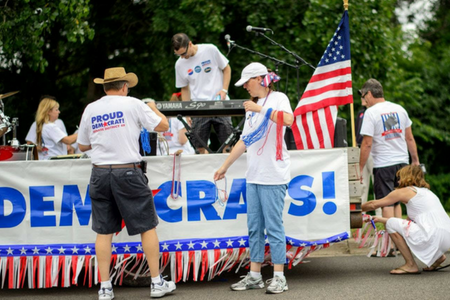 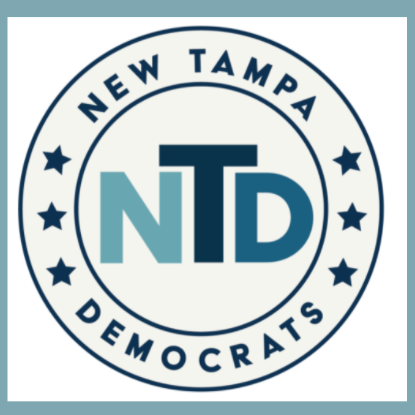 newtampademocraticclub@gmail.com
4th Monday of the month
7:00 pm to 8:30 pm 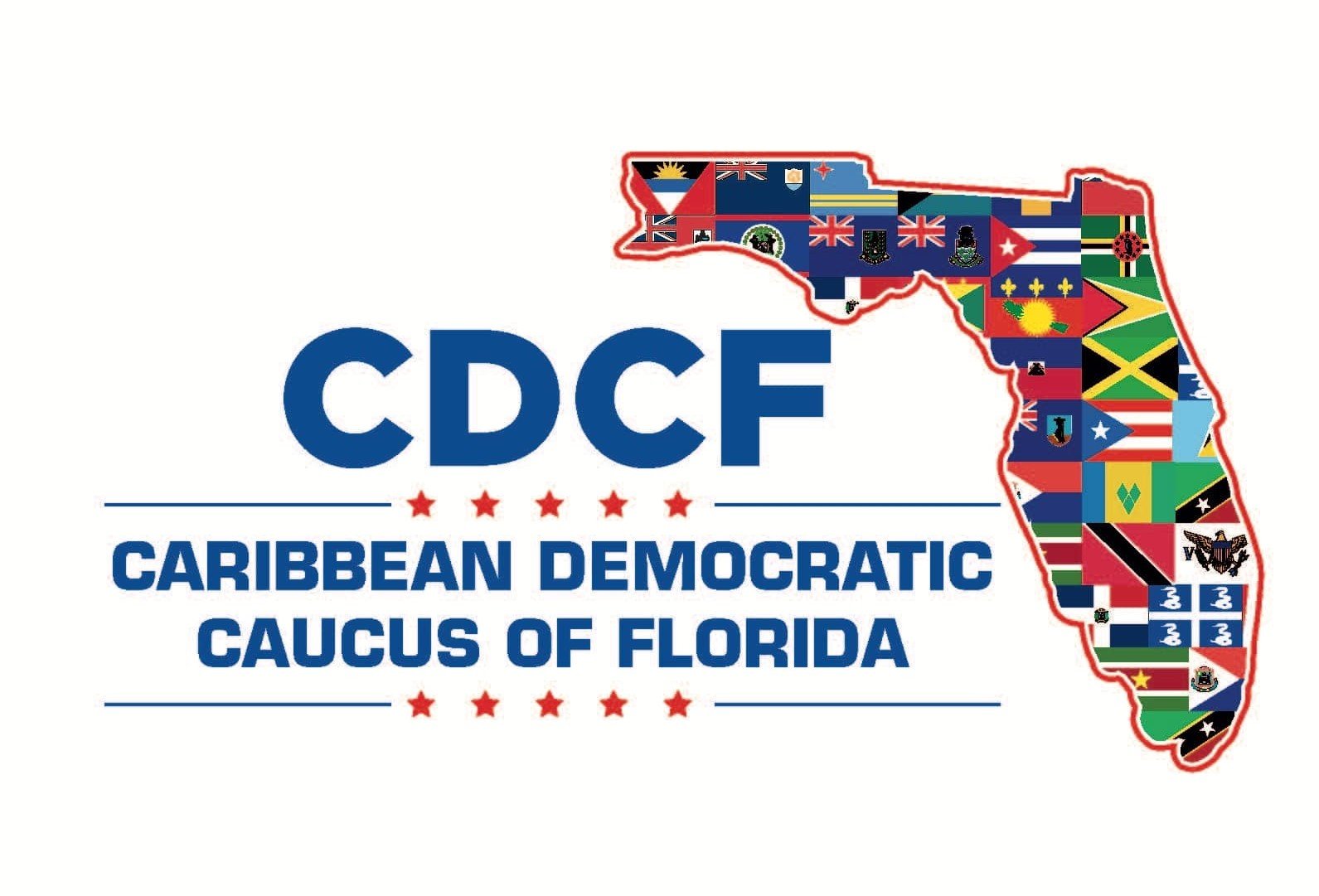 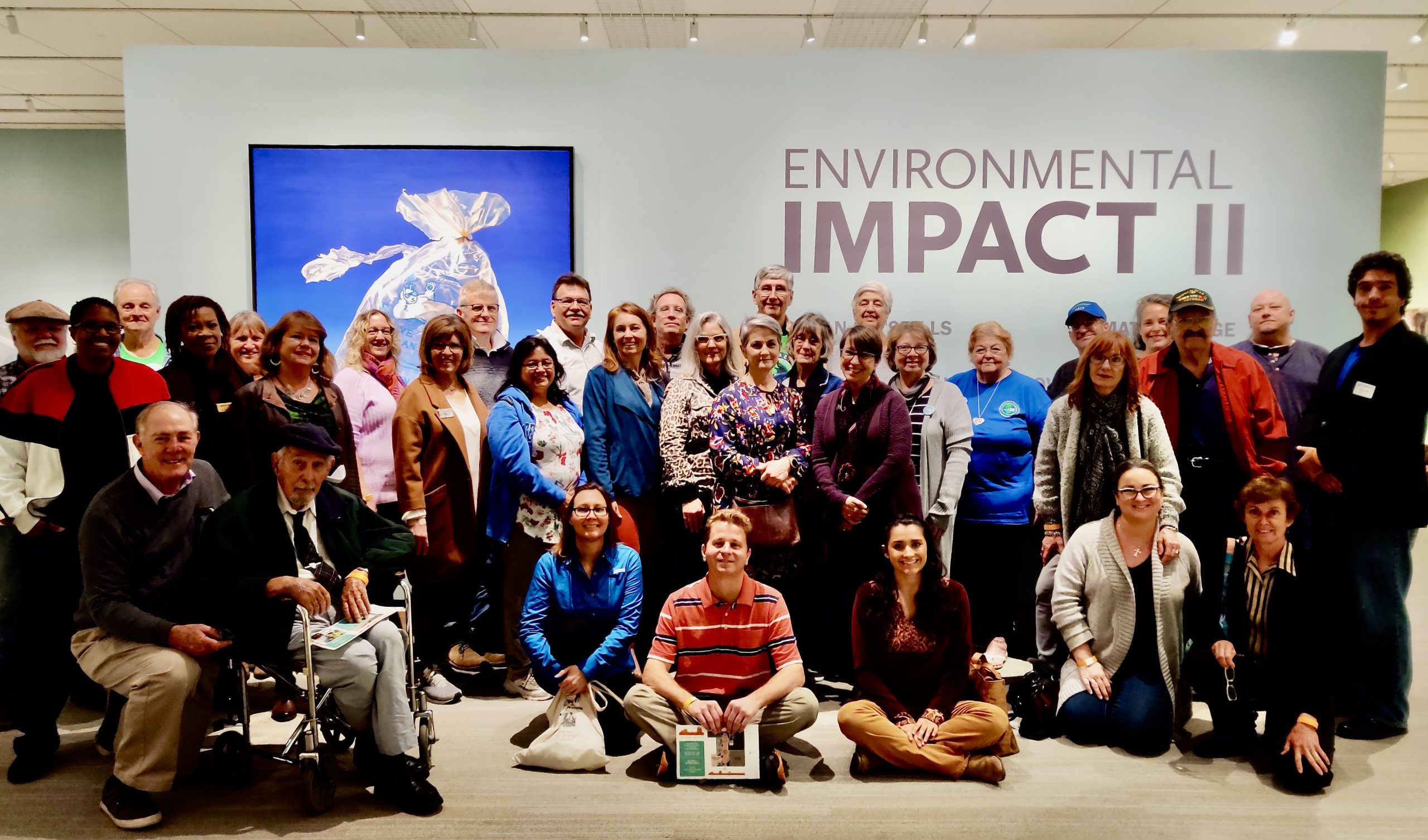 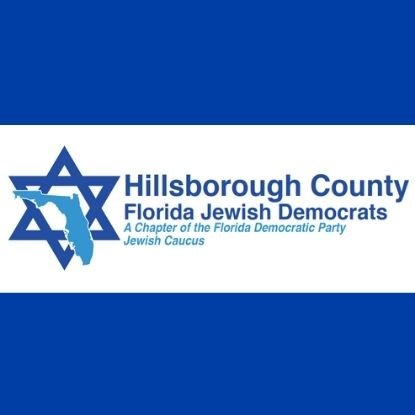 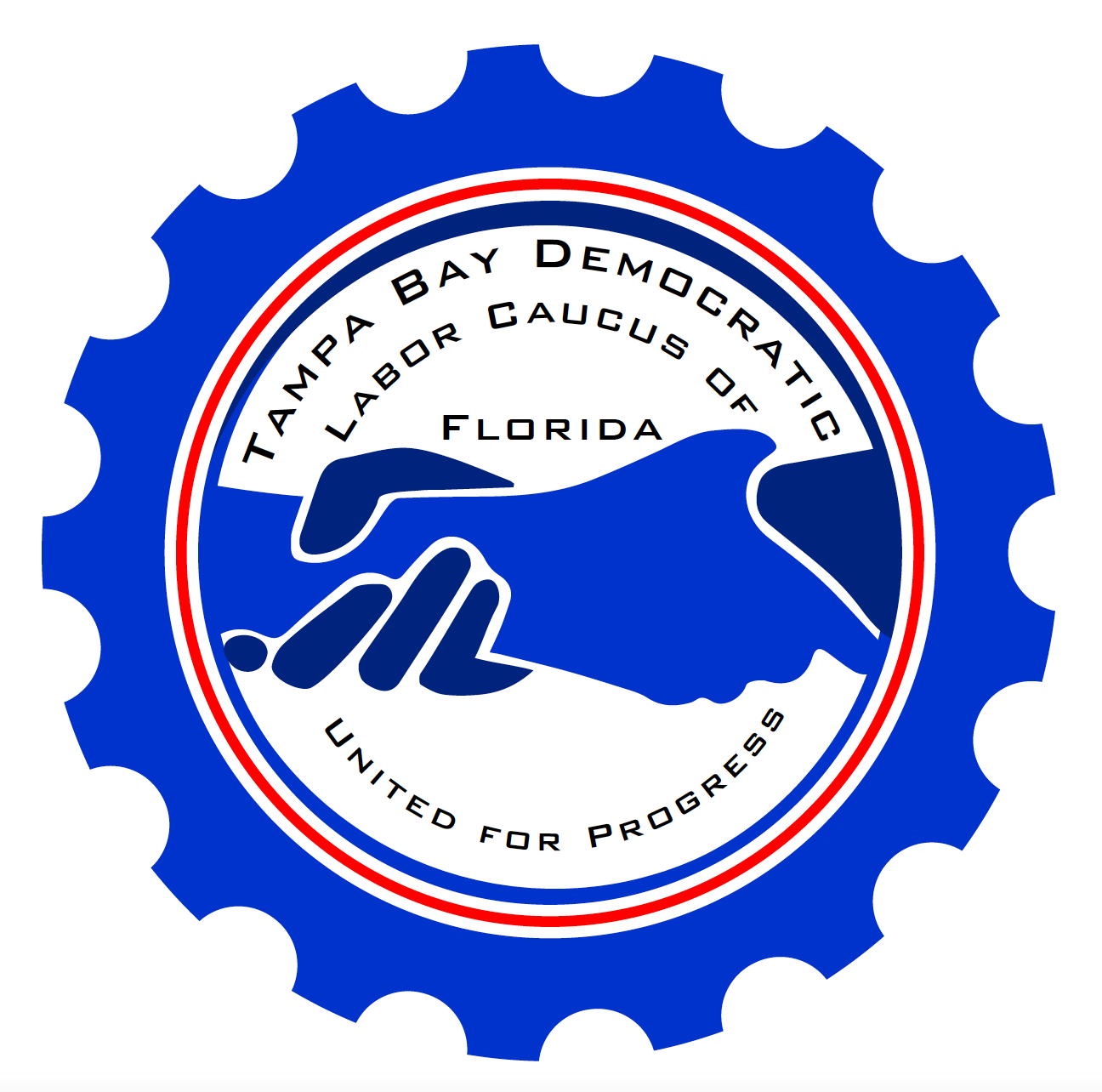 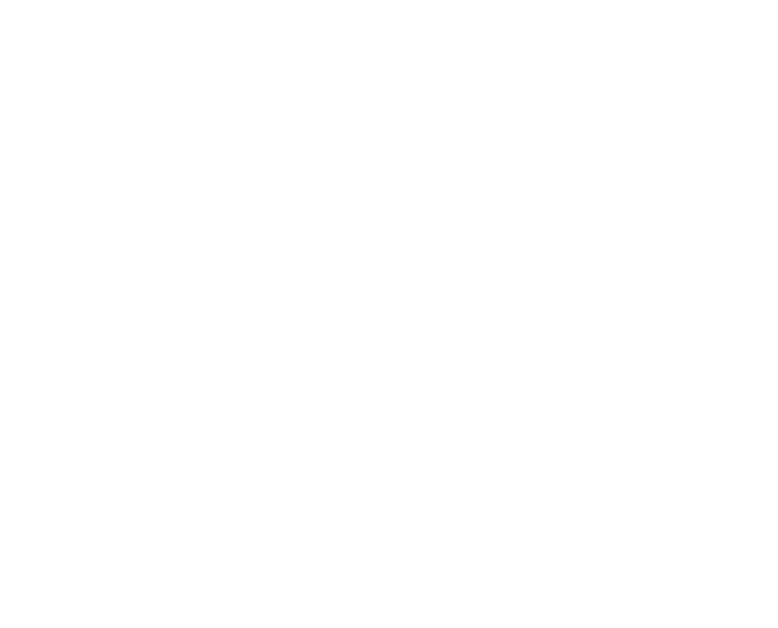 Use Mobilize to find and register for a variety of events in and around Hillsborough County. You can find club and caucus meetings along with events to help register voters, canvas, sign wave, participate in trainings, and more. There's a lot to choose from and it's continually updated so check it out!

I find the work of the Democratic Women's Club to be so important. We need the voices of women to be heard and counted. We've come a long way, but there are still a few mountains to be climbed.

My career as a Journalist put me on the front lines of so many of the issues we, as Democrats, are working to change.  We can't turn away from doing what we can to care for our communities.

If you are passionate like I am in trying to create a better world for all of us, I welcome you to join the Hillsborough County Democratic Women's Club and work for the change we all want and know is needed.

Jordan is a Florida native with a BA in Political Science from USF. She is motivated by a deep-rooted belief that civic engagement is the basis for any real change. Jordan has participated in local and nation campaigns in direct and coordinated capacities. Working for the FDP, she helped build a solid win for Rick Kriseman as Mayor of St. Pete and Margaret Good for State House in Sarasota. She was statewide Data Director for NextGen America. Recently, Jordan and her partner became owners of Parsons Wilson LLC, a veteran consulting firm that has run over 400 Florida races since 1981.

Jordan’s passion for electing good, qualified, and just candidates runs deep, and she particularly enjoys mobilizing minority communities who are historically left out of the conversation.

As well as being President of this caucus, Karen is Co-Chair of the DNC Disability Council (SE region) and member of the Florida Democratic Seniors Council. She was the 2017 Recipient of the Hillsborough County Democratic Party Monroe Mack Community Service Award and she and her son Michael were recognized by the Tampa City Council for Outstanding Work in Healthcare Advocacy. She has shared the stage with Congressman Joe Kennedy and former Congressman Tony Coelho, author of the ADA.

She appeared with her son Michael on the MSNBC program, The Last Word. She has advocated for health care, the expansion of Medicaid, increased funding for the Home & Community Based Services Waiver and Medicare for ALL.

Karen served 16 years on the Board of the Florida Alliance for Assistive Services and Technology, FL’s Tech Act Project, and many other committees. She resides in Tampa with her son Brian and is most honored to be called Mom and Grandma.

Jen is a lifelong Florida Democrat with an MS in Statistics from UCF.  Go Knights!  She has been a member of the Hillsborough Democratic Party since 2018 and a District Leader since 2019.  Jen is excited to increase voter engagement in the North Tampa area especially among younger generations.  She lives in Lake Magdalene with her husband, Keith, and their four rescue pets.

Alexandra Khalel is committed to equity in education, justice and a mental health advocate.

As a member of the Progressive Caucus since 2019, she has served on the steering and social media committees, among others, and helped with the latest website redesign.

Last year, she volunteered on the campaigns of Jessica Vaugn, Sky U. White and Ione Townsend, as well as on the Environmental Caucus.

From planning and strategizing social media outreach, to ad campaigns and graphics, Alexandra has helped to increase traffic across platforms on behalf of various caucuses and candidates.

Alexandra graduated in 2009 from University of Missouri, St. Louis with a BA in Criminology, which led her to work in a group home for children with behavioral and mental disorders. She later became a local real estate agent, spearheading recruiting and marketing for a real estate brokerage.

Alexandra lives with her partner, Mohammed Khalel, and their 2 children. As a multicultural Arab and Black household, the Khalel family is dedicated to a future based on equity and inclusion.

Michael currently serves as the Communications Manager of Equality Florida, the largest LGBTQ civil rights organization in the state, where he’s been committed to advancing LGBTQ+ issues and progressive causes in the state and on the national level. Michael has been involved with the Hillsborough Young Democrats since 2018 and stepped up from his role as the Public Relations chair to run for President in 2021. Michael is also a 2021 Institute Fellow at New Leaders Council (Tampa Bay), a member of the Hillsborough County State Attorney’s Community Council, an elected Delegate to the 2020 Democratic National Convention, and was named a 2021 Rising Star in Florida Politics Influence Magazine. 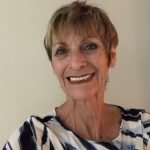 Fran Bodman graduated Hunter College in 1965 with a major in history and a minor in political science and secondary education.  Fran taught social studies at Mabel Dean Vocational high school and Long Island City high schools in New York City from 1965-1969.  As a member of the UFT she participated in the teachers’ strikes in 1966 and 1968 under the leadership of Albert Shanker.   After a move to Miami, Florida, she taught social studies at Miami Killian (1973-1979) and Miami Sunset (1979-2005) senior high schools. Fran was a member of UTD and participated in many UTD demonstrations;  in 1985 she was elected  the union steward at Miami Sunset for 15 years.  As a teacher at Miami Sunset she taught government (general, honors, and later AP government ), economics (Junior Achievement, honors and and later Ap macro economics), and Street Law which included assisting in the creation and participation in Mock Trials in the Miami-Dade School System.  Miami Sunset mock trial team won in 1985, 86 and 87 and represented Miami-Dade in the National Mock Trials in 1987.  One of her high points was a special project she ran in the government classes every election cycle by inviting local candidates to her classes. Students signed up to volunteer to participate in one or more of the campaigns, they had to log in 15 hours and write an analysis of the experience.  She wrote her Nova University master’s thesis based on the impact of active civic participation of her students.   After retiring in 2005, Fran was a co-President of the Solivita Democrats working on the 2007 Obama campaign; moved to Dawson, Georgia - joined the Dawson Democrats and participated in many demonstrations in Atlanta; moved to Valencia Lakes in Wimauma in 2015.  She became active in the South Shore Democrats and was elected President in 2018.

A teacher, a political activist, a wife, a mother, and a grandmother, Fran’s love and commitment to her family and country are ongoing.  A commitment to democracy is to stay vigilant and active.

Farah is a lifelong Democrat and active volunteer. She grew up in Maryland and has a degree in Family and Community Development from the University of Maryland.  She previously lived in Atlanta, Georgia and Ft. Worth, Texas before moving to Tampa in 1992. She has been a member of the South Tampa Democrats since its beginning in 2008 and is a supportive member of the Progressive Caucus and Disability Caucus. She worked in various areas including race relations, health education, hospitality, tourism, and as a travel agent before focusing on raising her children while her husband’s engineering career required him to travel abroad frequently. Farah and her husband Randy have two adult children and one grandchild who live in Blue western states, where they will be visiting more often now that Randy is retired.

Russ Patterson was born in Texas to good Democrats who encouraged him to be involved in politics.

He is a graduate of the US Air Force Academy, and served 20 years with the USAF performing duty in Oklahoma, California, North Carolina, Great Britain, The Netherlands, Germany, and Norway.  After his service, he was hired by a British company to organize the logistics to send scientists all over the world.

After living in Europe for 18 years, he returned home and became very active in Democratic politics.  He worked on campaigns as an organizer or field director in Missouri, Maine, Rhode Island, Connecticut, North Carolina, Louisiana, and Arkansas.  He came to Florida in 2004 to lead a get out the vote campaign and decided to stay and became an organizer for Equality Florida.

In 2006, he married Candy Gale.  Because his Candy was a teacher, he became one too so their schedules coordinate.  In 2010, he ran for State House. While he did not win, he ran a strong campaign in an incredibly bad year for Democrats.